A lot of people invest in solid doors, deadbolts, and other security measures, but they completely neglect their windows. Not protecting your windows is a big mistake.

Windows and glass doors are serious safety and security weak points. From break-ins to hurricanes, unprotected windows can easily shatter and provide burglars, wind, and anything else with an open door for their path of destruction.

You could upgrade your windows to double-glazed panes, which would strengthen the glass against impacts. However, doing so would require a substantial investment. An equally effective but less expensive solution is to install window security film.

WHAT IS SECURITY FILM FOR WINDOWS?

Security window film consists of laminated layers of polyester film. The thickness of the polyester film ranges anywhere from 4-14mils (100-350 microns), and each layer is laminated to another through the use of special adhesives. The thicker the film, the greater the strength of its break resistance.

For most home and business security applications, window security film 8-14mils thick is ideal as it can resist impacts of up to 400 pounds. While thicker film costs more due to the extra materials and added manufacturing time, it’s well worth it and much less costly than window replacements.

However, since applying security window film can be a bit tricky, we highly suggest hiring an experienced professional to install your film.

Now that you know what window security film is, the next question is: does security window film work? The answer is yes, and when applied correctly, it works quite well.

Here are a few of its benefits:

PREVENT INTRUSION
Window security film enhances the strength of window glass. It increases its impact and shatter-resistance, making it much more difficult for a burglar to break.

PROTECTION FROM STORMS
Hurricanes and intense storms with high wind gusts can stir up a ton of debris. Thanks to its shatter-resistant properties, window security film can keep debris outside of your home or business where it belongs.

MINIMIZE INJURY RISKS
In addition to reducing the risk of running into a burglar in the middle of the night or getting hit by flying debris in a severe storm, window security film can also minimize the risk of injury from shattered glass. Whether it’s an accident, natural disaster, or a bomb blast, security window film will help strengthen your glass and keep it intact.

HELPS PREVENT SCRATCHES
If your windows are prone to getting scratches in public spaces or homes with pets and kids, using a 7-8 mil security film will act as a protective “anti-scratch” layer.

There are other benefits associated with window security film as well. For example, some films like Rayno’s Rescue Series of window security film also offer UV protection. Not only does it enhance the strength of your windows and security of your home or business, but it helps keep the sun and the heat out, which is a huge plus.

HOW DO YOU INSTALL WINDOW SECURITY FILM?

Window security film is most commonly installed by retrofitting it inside of existing windows. This is performed at the job site, and the process involves precisely cutting and applying the film made of clear polyester and special adhesive layers to each window’s glass. Air bubbles and creases can appear if the film is not correctly installed. That’s why installing window security film is best left to professional installers.

The most common method of installing security window film is the “Daylight” method. This involves leaving a tiny gap between the window frame and the film. It’s easier than other installation methods and provides a passable level of protection for most properties. However, it doesn’t provide adequate protection from bomb blasts and aggressive intruders.

For this reason, most experienced installers prefer the “Anchored” method, which actually has two methods of its own:

MECHANICAL METHOD
The “Mechanical” method involves attaching the window security film to the actual window frame. Instead of being cut slightly inside of the edge of the glass, the film extends further and is attached to the frame with metal battens or other devices specifically made for the job. 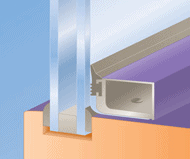 WET METHOD
Similarly, the “Wet” method also involves attaching the window security film to the window frame. However, rather than attaching it mechanically, an adhesive sealant is used.

When using this method, a special adhesive sealant is applied around the edges of the film to create a strong bond between the window frame and security window film. If properly followed, this installation method is arguably the best. On the other hand, if poorly installed, the lackluster results will negatively impact the window’s appearance.

Fortunately, there are certain products specifically designed to conceal the adhesive for a finished appearance. The best installers not only know what they are, but they also use them day in and day out.

On a side note, since tempered glass windows shatter into thousands of tiny cubes when shattered, the “Daylight” method is ineffective and shouldn’t be used. For these windows, one of the anchored methods should be used instead.

IS WINDOW SECURITY FILM WORTH IT?

Window security film may be an extra expense, but safety, security, and peace of mind are priceless. With this in mind, it’s worth it.

When a window is strengthened by window security film, it can deter a burglar and prevent a break-in. It can also help strengthen the window against impacts from fallen tree limbs and flying debris.

Security Window Film is Best For:

WHICH WINDOW SECURITY FILM IS THE BEST?

Protect your home with security window film. Install Resue to strengthen the windows on the first floor of your home where burglars break-in. If you live in a single-family, bungalow, or townhouse and are concerned about safety, this is the film to get.

To enhance the security of your home or business with the best window security film, click here to find a Rayno supplier and installer near you.